I first came across Gabe in 2009. I was looking for an instrumental of “A Whole New World” on YouTube that had a guy singing the Aladdin parts only so I can sing Jasmine’s (Yes, DIY karaoke!). Luckily, I stumbled upon Gabe’s sing-along cover of the song which was exactly what I was looking for! And after our virtual duet (I know, right?), I then found myself getting lost in his channel, watching video after video, smiling as he starts each one with his signature “hallo”. I found him to be extremely talented yet so unassuming. I instantly became a fan that day.

I have followed Gabe since then, loving his musical style and sound, his personality and genuineness that comes through in each video. But more so, I fell in love with his original songs. I just loved how Gabe’s lyrics could be so relatable and simple yet so profound and “tagos sa puso” as we would say in Filipino. I couldn’t wait for the day that I would be able to watch him live. And so it came… 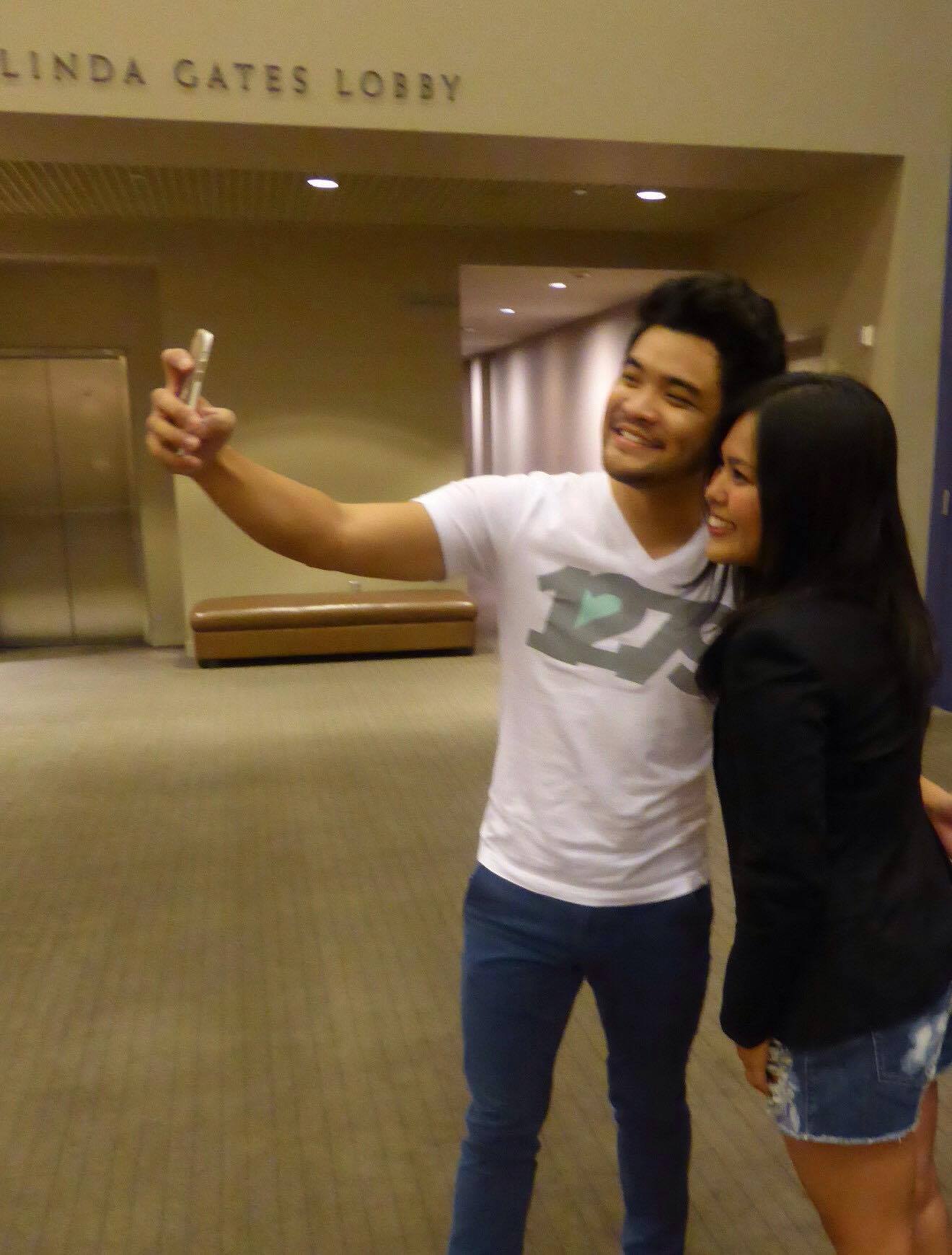 In 2014, having lived in Singapore for five years, I decided to travel for a few months before relocating back to Manila. While in Vancouver, I found out that Gabe was having a show in Seattle (which was only 4 and half hours away by the Amtrak Cascades Train!) and no second thoughts there – I changed my itinerary and rebooked everything to make sure I got to watch his show and meet him! It was such a surreal experience. He was exactly the same humble, sincere, and talented guy that I’ve been watching and listening to. Needless to say, he sounded no less than amazing! It was such a treat.

So when I found out that Gabe was going to Manila for his Twelve album tour, I knew I wouldn’t pass up the chance to see him again.

At the Meet & Greet in Shangri-La Plaza, you could feel the excitement from all of his fans that have been waiting to see him for 6, 8, even 10 years! Gabe sang a couple of songs before proceeding to the meet and greet which lasted for about 3 hours! The reason it took that long was because he was really taking his time talking to each fan, signing merchandise and personal items, recording greetings for friends, and even taking Boomerang videos! What a memorable night.

And so came the highlight… I wasn’t able to get a ticket to his shows as they sold out very quickly so I was ready to pounce on the scalpers on those days. But thankfully, I was given the chance to catch his last show on March 4th through One Music PH as part of their Music Army. I was even able to bring along my friend, Julie, who is also a huge Gabe Bondoc fan. Both of us are celebrating our birthdays the next week so this was a great birthday gift!

Before the show started, Marco Selorio, the man behind MAS Presents who brought Gabe to Manila, welcomed us all and held a mini singing competition with 5 audience members (they were all great!). The same amazing artists that opened for Gabe at the Meet & Greet also performed at the show - Justin Vasquez, Keiko Necesario, Blessie Pica, and Calvin Orosa.

And the moment we were all waiting for! I thought I would be calm and collected already, having seen Gabe live two times already, but I was completely wrong. The excitement (and palpitations!) was still there and I was trying very hard to hold back tears, worried that people will think I am overreacting (I usually am though, ha!). But I looked around and saw there was no reason to think that way. Teatrino was a relatively small venue but it was perfect as the show felt very intimate, as if I was around friends and we were all there to support our friend’s show. 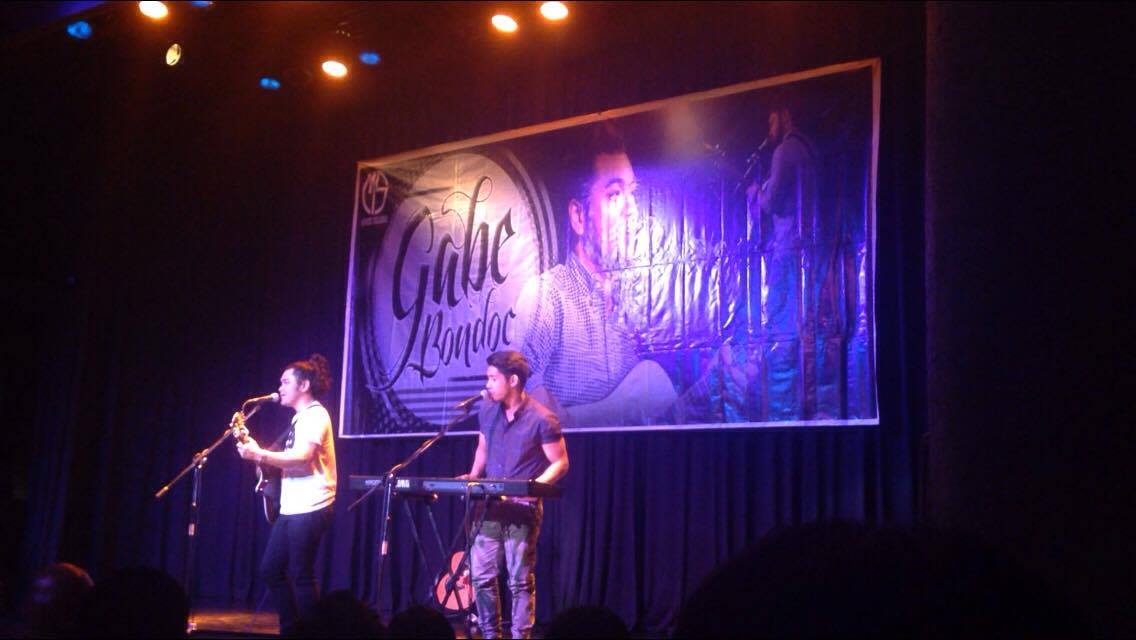 And I guess that’s how it really was… Most of us in the audience have followed Gabe from many years ago and we have all been connected through Gabe’s music for years. We probably spent long drives and road trips listening to the same Gabe songs, reminisced about our childhood sweetheart while listening to “You’re It”, played “Jacob’s Blues” over and over during a heartbreak, coped with a long distance relationship with “Close”, or hoped a guy would serenade us with “Nothing More” or  wished you wrote “Gentleman Don’t” for your girlfriend.

He usually starts his shows with a worship song and so he did with “Here Now” by Hillsong (which he also did in his Seattle show) and went on to sing his originals. It was just him and his guitar – very raw and real, just how we’ve known him. I loved how Gabe told us the stories behind the songs he has written and how the songs mean to him which gave us new appreciation for them. And Gabe made sure to give us pleasant surprises too – counting off with “isa, dalawa, pito, siyam” instead of his usual 1279, howling like a wolf in “Jacob’s Blues,” injecting Beyonce’s “Single Ladies” in “Summertime”, or singing “when you say mahal kita” in “When You Say”. Calvin joined him later on his keyboard which gave a refreshing touch to Gabe’s songs. It was such a treat watching them as you could tell how much fun they were having playing music together.

Our time with him was too short so we obviously asked for an encore! He surprised us by singing “Circle of Life” from the The Lion King which was truly remarkable! We asked for another song which was gladly supported by Marco since it was Gabe’s last show in Manila! He sang more Disney songs for us with “Part of Your World” and “How Far I’ll Go”. The show ended and we were all on a high. But the night wasn’t over… Gabe has given all of us the chance to say goodbye to him through a meet and greet again.

I’m always blessed by Gabe’s talent and soul and I eagerly wait for the next time I get to watch him live again.

Singing, Zumba and traveling are always top of mind

Other posts by Ma'an Santos