If you ask local musicians who the most influential OPM band is, there will probably be one of two answers: Eraserheads or Rivermaya. Both became legends in their own rights, with their songs forever etched in Filipinos’ minds. With both bands rising in popularity in the early 90’s, it was perhaps inevitable that fans would be involved in a rivalry over which band was better.

Rivermaya has released 11 full-length albums to Eraserheads’ seven, but arguably the latter’s albums and songs were more consistently iconic to the former’s hit-or-miss. We bet you can probably name more Eheads albums than Maya albums, especially considering that vocals are one of the main considerations for fans and Rivermaya’s changed theirs more than once. We think it’s pretty safe to say that their later albums, after Bamboo then Rico Blanco left the band, weren’t as well-received as their earlier ones.

But that’s not to say that Rivermaya wasn’t as iconic as the Eraserheads in their heyday. Rivermaya’s hits include 1994’s “Ulan” and “Awit ng Kabataan” all the way to 2005’s “You’ll Be Safe Here” and “241.” Eheads’ last album in 2001, “Carbon Stereoxide” was a little bit darker in theme and, as a result, wasn’t as crowd-pleasing as hits from “Ultraelectromagneticpop!” (“Toyang,” “Pare Ko”) or “Sticker Happy” (“Spoliarium”).

But in terms of creativity and variety, we’d have to give it to Eraserheads. Their sound and song topics ranged from the borderline-cute and upbeat “Ligaya” to the tender “Tuwing Umuulan at Kapiling Ka.” They were also pioneers for lyrical storytelling, best exemplified in “Ang Huling El Bimbo” and “Spoliarium” which both deal with specific, real-life stories and issues, yet are somehow still relatable.

To this day, fans still clamor for reunions from both bands. They were indulged by Eraserheads in the now-legendary reunion concert in 2009 entitled “The Final Set.” They’d even released two tracks in 2014 via Esquire Magazine, much to fans’ delight. Rivermaya, on the other hand, had recently reunited (with the “classic” lineup with Rico Blanco) in 19 East earlier this year in what they dubbed as a “secret semi-reunion.”

Even as their fans participated in a rivalry, band members from both sides are the first to say that there was no bad blood between them. Take it from Ely Buendia himself. 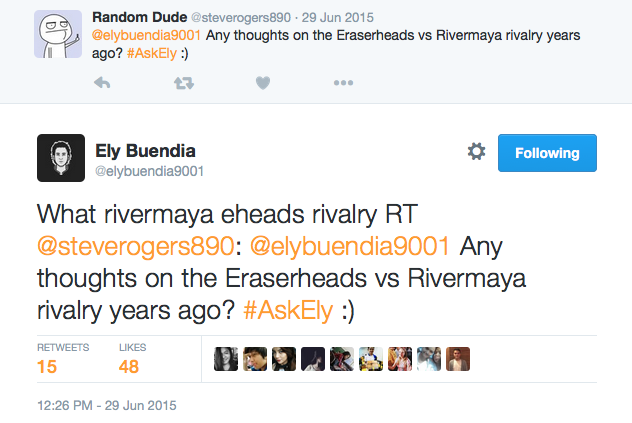 Are you a fan of Rivermaya or Eraserheads? Leave a comment below!