Coming  from  the big success of her FULLBLAST! PINOY SUPERBANDS concert last Oct 20 2017, Lolita is once again set to excite and entertain her loyal fans on Valentine’s Day.  First ever will they see their Folk  Rock idol (aka “Voice of the Earth”) onstage of the most prestigious Manila Hotel singing their most coveted, beloved hits of all time!

This being the ‘first ever’ big valentine concert of Lolita, she promise to offer her fans ALL her greatest hits from ASIN, her own signature hits and ‘never been heard’ before cover rock love songs!

Together with the Metro Manila Concert Orchestra, come and be mesmerize by the voice of Earth, Lolita Carbon and the boys on  February 14 2018 at the Grand Ballroom of The Manila Hotel. Dinner buffet starts at 6pm. Show starts at 8pm. 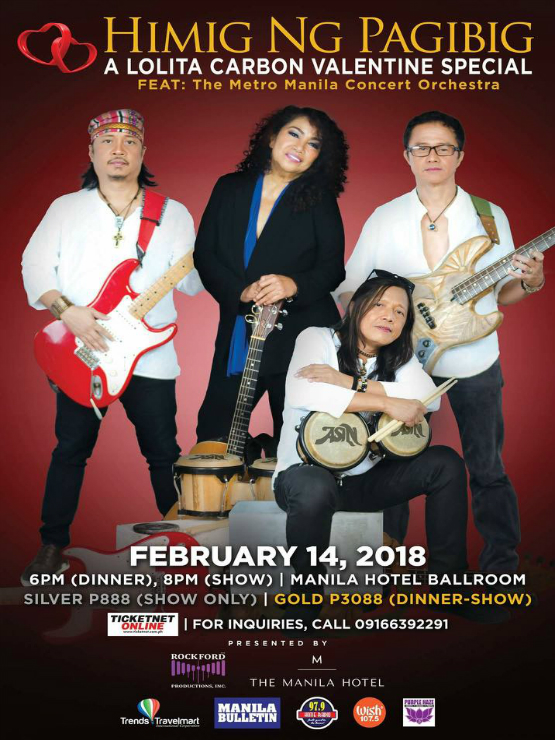 At age 10, Lolita won in the “Tita Betty Children’s Show”, a live radio talent show, and her winning song was “The Impossible Dream”. She was dressed all in yellow. Ironically, said song became the signature song of Filipino martyr “Ninoy Aquino” when he was assassinated in 1983 and yellow also became the color of protest of the Filipino people until the bloodless “February Revolution” in 1986.

She joined the Philippine Navy Band N2 Division as a singer for 6 months when she was only 13 years old. At a young age, she was already singing numbers from Shirley Bassey.

Lolita grew up in Malate, Manila and her father had a lot of musician-friends in the neighborhood. Lolita grew up in a house full of instruments that's why she learned how to play the guitar a very early age and really wanted to become a singer.

She first became a professional singer in "One Way Up Band" in 1975 covering songs and duets by Marvin Gaye, Peaches & Herb, Cold Blood, Tammi Terrell, among others.

Her first stint as a folksinger was at Kola House located at Ermita, Manila back in 1976 where she first sang a number from Janis Joplin called "Me and Bobby Mc Gee".

In late 1976, the folk-duo of Mike "Nonoy" Pillora Jr. and Cesar "Saro" Banares Jr. encouraged Lolita to join them which later became the "Salt of the Earth", after a Joan Baez tune. Said folk-trio were popularly known then as the "Peter, Paul and Mary" of the Philippines and started singing at the "Bodega", a premier folk venue during the 70's.

Lolita did the Japanese version of "Anak", the phenomenal international hit by Freddie Aguilar.

In 1977, the folk-trio was signed up under Vicor Music Corporation and they changed their name into "ASIN" (literal meaning, salt). The band released their first solo album "Masdan Mo Ang Kapaligiran (Look at the Environment)" which contained an all-Filipino repertoire in September 1, 1978. They were one of the first bands to successfully explore social and political themes in their music.

Her song "Pagbabalik", which was included in the first album, won as the "Best Folk Song of the Year" in the 1978 Aliw Awards.

In 1981, she released her own vinyl single under the name "Lolita and the Boys" with the song "Usok" which was the first reggae approach in Philippine music history flip-sided by "Ganyan Lang" a blues-based song which depicts life the way Lolita simply sees it.

In late 1981 to 1982, she had a short stint with Popong Landero and Sammy Asuncion (of Spy) and their band was called "Sulabama" doing original compositions. They were the first reggae band and went on tour in Mindanao where they became such a big hit.

She later on joined a group in early 1983 called "Holy Smoke Band" which became her back-up band when she was based in Davao City (Mindanao, southern part of the Philippines).

ASIN re-grouped and went on tour then later on released their reunion album titled "Himig ng Lahi". The album became the Best Album of the Year for both AWIT Awards and Jingle Magazine Awards in 1984.

Lolita and other members of ASIN later on became part of an experimental "supergroup" of musicians in 1990 called "Lokal Brown" which released an album with the song "This Is Not Amerika".

In 1991, she gathered together a group of session musicians and called the band "NENE". They released her first full-length solo album which contained the hit song, "Biyaheng Langit". Another song in the album titled "Paraisong Liku-liko" was awarded as "Best Rock Recording" in the 1991 AWIT Awards.

Cesar "Saro" Banares Jr., the main songwriter of the folk-rock group ASIN died in 1993 and everyone thought that was going to be the last of ASIN's music legacy. In 2000, Lolita decided to re-group with the 4th member of ASIN, Pendong Aban Jr. and they released an album called "Pag-ibig, Pagbabago, Pagpapatuloy". The first cut "Dalawang Dekada ng ASIN (Overture)" (a classical arrangement of all of ASIN's top hit songs) won as "Best Musical Arrangement" in the AWIT Awards 2002.

ASIN, represented by Lolita and Pendong, was the only Filipino artists awarded as one of the 2004 Environmental Champions by the DENR-World Bank Publication - Environmental Monitor 2004 given last June 20 2005.

Are you a fan of Lolita Carbon? Tell us in the comments section!