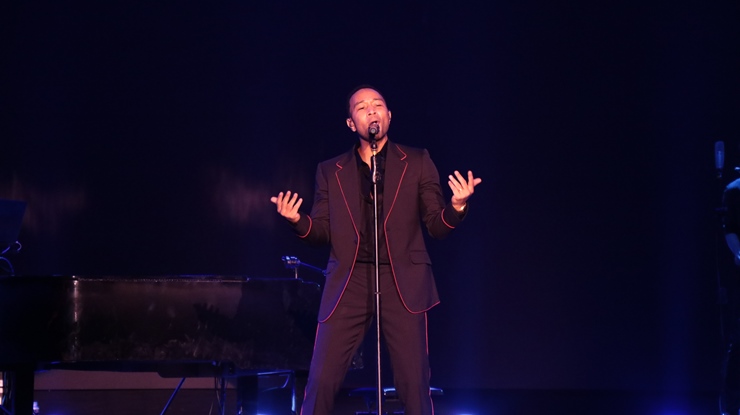 It was a Wednesday evening many would remember forever.

In his return to Manila for a second time, John Legend sure gave the Filipino audience an evening to remember yet again. Last Wednesday night, March 21, the 10-time Grammy winner delivered a perfect as it can be show at the Smart Araneta Coliseum.

His Manila concert, part of the Darkness and Light Tour, saw Legend perform many of his greatest hits such as “Ordinary People,” “Green Light,” “Used to Love U,” his version of “Beauty And The Beast,” among others.

Whether you’re a long time-Legend fan or someone who fell in love with his music just recently, if you were among the crowd last Wednesday night, you definitely now have a deeper appreciation of his craft.

From his opening number with “I Know Better” on the piano, to inviting a fortunate lady to sharing a dance with him while performing “Slow Dance,” up to the epic performance of “All Of Me” which drew arguably the loudest screams of approval from the crowd as part of his encore, Legend was simply the smoothest performer you could ever witness take the stage.

Valentine’s Day may have taken place more than a month ago already, but Legend’s charm combined with his sleek style of performing, and of course, the wave after wave of his greatest hits coming at you, gave the show a similar vibe as to what you would feel on a second date with someone you deeply adore.

In between his numbers, it was nothing but cheers, loud applauses, several standing ovations, and of course, the occasional “I love you John!” coming from the audience.

When Legend was about to end the show with “All Of Me,” he said to the crowd singing with him, “you sound beautiful, Manila!” Truth be told, so did he. And everyone present there must be looking forward to a third date night with him.

Were you at John Legend's Manila concert last Wednesday night? What was your favorite moment from the show? Let us know in the comments section!