Last weekend’s episodes of “We Love OPM: The Celebrity Sing-Offs” saw the six teams perform the greatest hits of OPM icon Rico J. Puno. As always, every team showcased varying interpretations of the mustache-donning singing legend, but there was a trio that shone the brightest. That trio was Tres Kantos which is composed by Dominador Aviola, Bugoy Drilon, and Jovit Baldivino, and mentored by Erik Santos. Their rendition of “May Bukas Pa” garnered them 98 “love hearts” which is the highest score for a performance thus far in the competition.

Not only did Tres Kantos sing their song beautifully, but according to them, their performance was a tribute to ethnic tribes as well. As a result, their song number drew a standing ovation, and comical praises from Rico J himself. The trio’s hair-raising performance also received positive feedback from netizens. YouTube user HELLOW YO cheers for a different team, but agreed that Tres Kantos always impress with their singing. As for Twitter user @raymondinogan, he said that the weekend winners deserved their standing ovation.

Check out the comments made by netizens on YouTube. 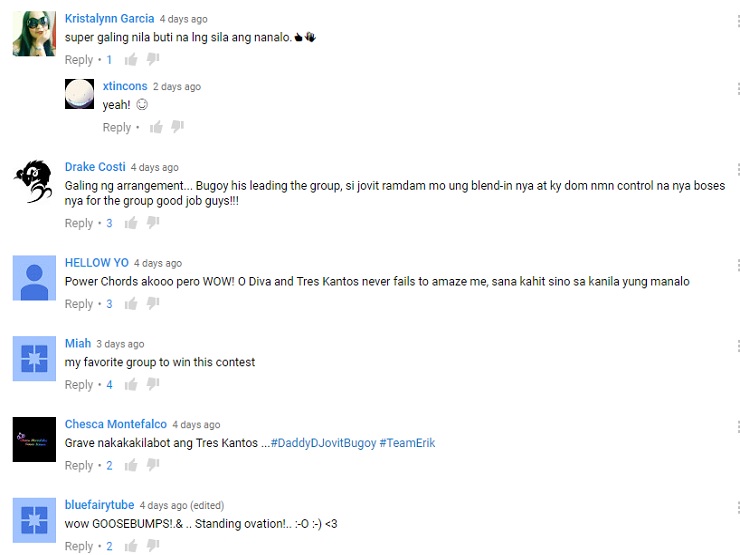 Read the comments on Twitter about Tres Kantos' performance in the picture below. 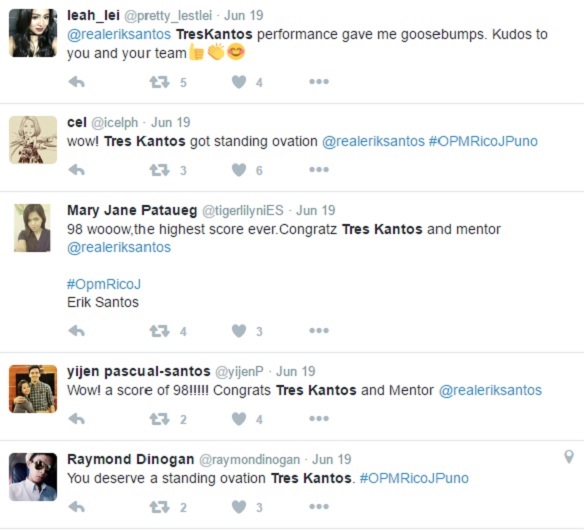 With Tres Kantos’ win and score last weekend, they now solidify their hold on the top spot, and should enter this weekend’s performances with less pressure on their shoulders. They now have an accumulated score of 567 “love hearts” while O Diva trails in second place with 561 “love hearts” in total.

We’ve now reached a crucial stretch in the show, and pretty soon the competition is expected to become a lot more intense as other teams try to catch up. Regardless, Filipino music fans are sure to be treated with even more amazing performances by their favorite local music artists in the coming weeks.

Watch Tres Kantos sing "May Bukas Pa" in the YouTube video below.

Do you think Tres Kantos will get the highest score again this weekend? Tell us in the comments section!

Artists Call for Revision of DMCA

Are We About To See Kurt Cobainâs Different Art?