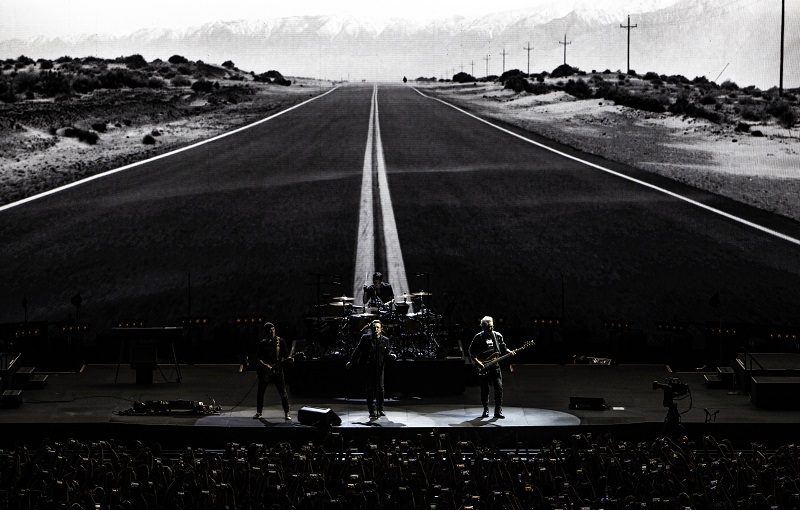 Above all the advocacies they espoused, U2 captivated Filipino fans with their stirring and powerful music

After all has been said and done, after all the trending posts, and even the praises and the bashing we see on the political front for a band who never really shut their mouths for advocacies they push—it was all about U2’s pure yet powerful music.

Yes, there was that humungous screen, and Bono’s declarations on the country’s “heroes” and women empowerment icons who have bolstered history. But who can deny that Larry Mullen, Jr.’s first drumbeats that signaled the start of the Joshua Tree Manila tour at the Philippine Arena in Bulacan made possible by Smart Music Live and MMI Live brought out something hidden in all of us who watched—excitement and exhilaration like no other.

And, of course the power of “Sunday Bloody Sunday” brought us to tears and made the world’s largest indoor arena a sing-along joint of the jampacked 55,000 capacity. And when Bono continued with “Gloria,” amd “New Year’s Day” everyone was marveled with his unfailing voice and charisma that still captivated the thousands who watched and heard him perform.

While we all admired the band for appreciating and saluting Red Cross volunteers, journalists, the truth-tellers and the activists who “keep this country spiritually safe,” Bono’s first lines of David Bowie’s “Heroes” truly lifted our spirits. And, this he segued from a mashup with a stirring rendition of “Bad,” that drove a lot to tears, recognizing that indeed their music meant a lot to them. And this we further witnessed when Bono and the crowd screamed their hearts out singing the chorus of "Pride (In The Name Of Love)."

When they rushed to the main stage and woke that sleeping, mammoth LED screen with Anton Corbijn’s evocative, riveting images, the crowd further sang with Bono U2's fascinating anthems from the Joshua Tree album “Where The Streets Have No Name,” “I Still Haven’t Found What I’m Looking For,” “With or Without You,” and “Bullet the Blue Sky.”

The Edge’s riffs had really been a fascinating draw, as with Adam Clayton’s bass, and Larry Mullen, Jr.’s continuing beguiling beats that revved up the crowd with another Joshua Tree classic from 1987 “Red Hill Mining Town” with a Salvation Army brass band as the cinematic backdrop that again featured Bono’s charming and mesmeric vocals. He would retain this superb, idyllic frontman charisma on “In God’s Country” and “Trip Through The Wires,” which showcased how classic American rock-and-roll, and country music influenced and enriched them. It was worth noting that the woman featured on the giant screen dressed like a cowgirl was The Edge’s wife, choreographer Morleigh Steinberg. More Joshua Tree standards followed—a touching tribute to native Americans in “One Tree Hill,” a vivid reference to Trump America in “Exit,” and the haunting images on the 200 ft wide by 45 ft high 8k resolution screen of women losing their “light” as they performed “Mothers of the Disappeared.”

Bono again brought delight to the crowd with a song that was not included on most of their tour stops, their Grammy Award-winning “Desire” from Rattle and Hum, with the frontman on the harmonica as the band “popped up” from their short intermission to sing another Grammy-winning tune, “Elevation” that further elevated the musical connection and visual power of the show. “Vertigo” and “Even Better Than The Real Thing” also electrified the arena with the band’s incredible energy and vibe before performing a recent release “You’re The Best Thing About Me.”

And after moving the crowd with their upbeat song “Beautiful Day,” the band honored women icons of empowerment throughout history, including those from the Philippines, in their meaningful and poignant performance of “Ultra Violet (Light My Way).” The huge screen would then show these icons that included national hero Melchora Aquino, late former president Cory Aquino, singer Lea Salonga, Sen. Pia Cayetano, activists Lidy Nacpil and Marinel Ubaldo, and feminist movements Grrrl Gang Manila, #BabaeAko and #OneBillionRising. Bono would then mention journalist Maria Ressa three times, emphasizing that she is an “incredible woman” who lights up history.

And after delivering the heartfelt message with Filipino translations on the screen of “Love is Bigger Than Anything In Its Way,” the most thrilling, eloquent, enthralling, and astonishing concert experience in living memory in this divided archipelago ended with a call for unity, “One.”

While the thousands in attendance had a difficult time leaving the venue—with hours of traffic just getting outside the parking lot—they were still smiling, as the U2 concert had even checked off bucket lists, making that excruciating time and effort worth it.

Other posts by Gerry Plaza

Moiraâs âYou Are My Sunshineâ Cover Used In The U.S.